A group of families hit by the Grenfell Tower tragedy were taken on a trip to the coast organised by a London charity.

The small group of 15 adults and children, including several who survived the blaze, visited Felpham Sailing Club, on the West Sussexcoast, on Saturday and went sailing and played on the beach.

The day out was organised by the Play Association, a charity based in Hammersmith and Fulham which usually supports vulnerable children with special needs, after they were contacted by the Grenfell Fire Response Team.

The trip was among a number of efforts, including a free holiday appeal run on Facebook by Angie Mays from north Devon, to give those affected some respite as many families still await being rehoused.

Steve Boeje, chief executive of the Play Association, said the group, which included other youngsters from the Sutton and Brent areas on London, were “absolutely chuffed”.

“We’ve been going every year for about seven years and that was probably one of the best days down there,” he said.

“Obviously we had a very deserving group of people from Grenfell. They are living in hotels and some have been moved three times.

“Yesterday they could forget all that. 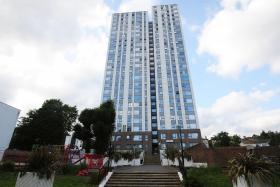 “Two little boys, aged six and eight, who were obviously serious affected and they just had joy on their faces all day.”

One mother on the trip, Nabila, told Sky News the trip was “amazing”.

She said she and her three children have had to move out of their home near Grenfell as it is unsafe and she was grateful for the time away.

“Breathing the air … it’s something different,” she said.

“We’re really grateful, we’re so honoured to have this moment of a day and to see them smiling and say ‘it was the best day!”‘

London Build is the leading and largest construction show for London and takes place at the Olympia on October 25th & 26th. London Build is FREE to attend and features 100+ speakers, thousands of attendees, CPD-accredited training workshops,  and entertainment. Book your free ticket today by clicking here